The Postmaster Manuel Payne built this house on top of the stone foundation of the Bostwick house named after John Bostwick who was the original founder of Port Stanley.

Manuel Payne operated the Post Office & Customs House next door to 205 Main Street in the 1800's and brought the telegraph system to Port Stanley, which served as an early warning station for the floundering boats on Lake Erie.

Manuel Payne eventually moved the telegraph machine into his home for easy access and late night messages. We believe he used the second floor landing for the telegraph. This area in the house provides a lookout onto the harbour and is also a semi-public space that could be used by customers without interfering in the house.

Since then the house has been a private residence in Port,and eventually was converted into commercial space for retail and restaurants.

After much work and renovations we bring you Telegraph House, our version of a harbourfront inn with two very grand bed and breakfast suites, all with either ensuite or private bathrooms.

Telegraph House has been recognized by Ontario Heritage Trust for the renovations and preservation of 205 Main Street in 2005. A historical plaque now graces the front garden through a complimentary effort and suggestions from Heritage Port and Heritage Central Elgin. 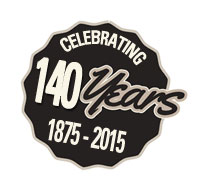 This excerpt from Free Press article about our historical front door ... 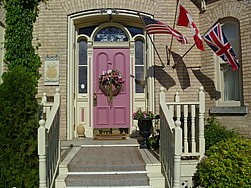 are finely crafted, requiring cabinetry and wood-bending skills. Beck defines a London door as "having an arch, touching the frame of the doorway, over the door, and smaller matching, lower arches over the sidelights. Each arch is perfectly curved and made of three layers of wood, the top layer with a rounded cross-section. The arches vary in size but their shape is consistent, and there is usually a simple corbel (also called a console or bracket, a flat-topped outcropping frequently with a downward-pointing scroll) at the junctions of the main arch with the arches over the sidelights."

"Figuring out who made these doors is a bit of a whodunit. Beck is tracking down her theory that many were created by two brothers: Jeremiah and James Moran, who came to London from Ireland in 1868."